The Ziegfeld Theatre opened in 1969 as a single-screen movie theatre. The theatre was named in honor of the impresario Florenz Ziegfeld, Jr. Between 1969 and 2016, more world premieres of Hollywood blockbuster films were held at the Ziegfeld Theatre than any U.S. movie theatre outside of Los Angeles. Building on a rich history, the Ziegfeld Ballroom opened in Fall 2017 as one of the most significant event properties in New York City. Drawing inspiration from Rockefeller Center and the 1930’s luxury cruise liner the SS Normandie, the Ziegfeld Ballroom will be featuring a color scheme of silver and greys to reflect its art deco heritage. With a column-free ballroom seating almost 920 guests at rounds, additional seating may be added in the balcony that overlooks the ballroom with sightlines to the stage. 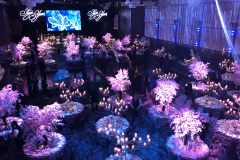 Under the strict supervision of the Orthodox Union.